For Chicago’s new crop of rebel restaurateurs, ethical and sustainable farm-to-table dining is not a trend – it’s a way of life

For food aficionados around the world, Chicago is best known not only for its fine dining, but particularly for its beef. Its history as a dining destination arises from the fact that it is the one of few major U.S. cities that rests within a state rich with farms. Illinois’ wealth of natural resources lends itself to an urban restaurant industry driven by fresh seasonal produce and grass-fed steaks. This farm-to-table lifestyle is quickly becoming Chicagoans’ preferred mode of dining.

In many parts of the world, the idea of obtaining one’s food from a farm might sound obvious, but in the United States it is anything but. Here, farm-to-table dining is a pointed act of rebellion against the status quo.

Johnny Hap, cofounder of Chicago’s Rootstock Wine & Beer Bar, is one of the restaurateurs I will be visiting. He takes great pride in Rootstock’s farm-to-table ethos. “In much of the world, buying food is a local practice,” Hap explains. “People go down the street to a farm or a market and they know exactly where their meat is coming from. But in the 1960s and 70s, farming became more industrialized in America. Meat was coming from huge factory farms where animals were mistreated. The farm-to-table movement is a return to the past – people know their farmers and they know the quality of the products they’re getting. It’s almost a revolution against industrialization.” Because of its position in a farm state, Chicago is a forerunner in this movement. I am curious to meet the other local chefs and restaurateurs who are taking part in the “anti-industrial revolution” Hap describes. 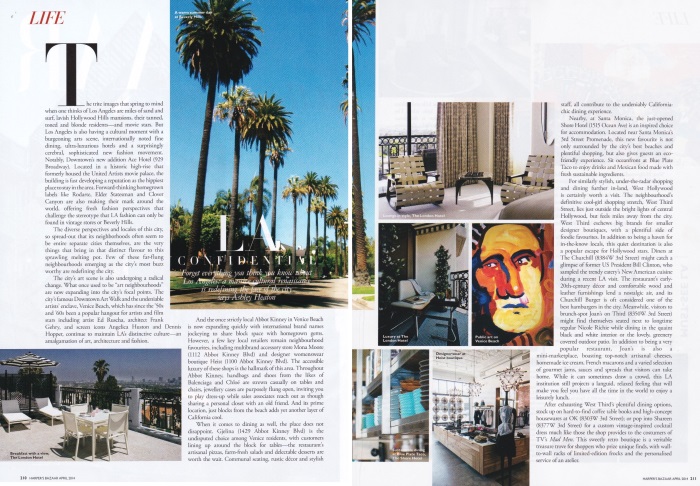 Excerpt: The trite images that Spring to mind when one thinks of Los Angeles are miles of sand and surf, lavish Hollywood Hills mansions, their tanned, toned and blonde residents – and of course, movie stars. But Los Angeles is also having a cultural moment with a burgeoning art scene, internationally noted fine dining, ultra-luxurious hotels and a surprisingly cerebral, sophisticated new fashion movement. One notable new addition is Downtown’s Ace Hotel (929 Broadway). Located in a historic high-rise that formerly housed the United Artists movie palace, the building is fast developing a reputation as the hippest place to stay in the area. Forward-thinking homegrown labels like Rodarte, Elder Statesman and Clover Canyon are also making their mark around the world, offering fresh fashion perspectives that challenge the stereotype that L.A. fashion can only be found in vintage stores or Beverly Hills.

The diverse perspectives and locales of this city, so spread out that its neighborhoods often seem to be entire separate cities themselves, are the very things that bring in that distinct flavor to this sprawling melting pot. The few of these far-flung neighborhoods that are emerging as the most buzzworthy are redefining the city. The city’s art scene is also undergoing a radical change. What were once known as “art neighborhoods” are now expanding into the city’s focal points. The famous Downtown Art Walk and the undeniable artists’ enclave of Venice Beach, which has since the 50s and 60s been a popular hangout for artists and film stars including artist Ed Ruscha, architect Frank Gehry, and screen icons Angelica Huston and Dennis Hopper, continues to maintain L.A.’s distinctive culture – an amalgamation of art, architecture and fashion.

And the once strictly-local Abbot Kinney in Venice Beach is now expanding quickly with international brand names jockeying to share space with homegrown gems. However, a few local retailers remain neighborhood favorites, including multibrand accessory store Mona Moore (1112 Abbot Kinney) and designer womenswear boutique Heist (1100 Abbot Kinney). The accessible luxury of these shops is the hallmark of this area. Throughout Abbot Kinney, handbags and shoes from the likes of Balenciaga and Chloé are strewn casually on tables and chairs, jewelry cases are purposely flung open, inviting you to play dress-up while sales associates reach out as though sharing a personal closet with an old friend. Its prime location, just blocks from the beach, adds another layer of California cool. When it comes to dining as well, the place does not disappoint. Gjelina (1429 Abbot Kinney) is the undisputed choice among Venice residents, with customers lining up around the block for tables – the restaurant’s artisanal pizzas, farm-fresh salads and delectable desserts are worth the wait. Communal seating, dim lighting, rustic décor and an impeccably stylish staff all contribute to an undeniably California-chic dining experience.

For similarly stylish, under-the-radar shopping and dining further east, West Hollywood is certainly worth a visit. The neighborhood’s definitive cool-girl shopping stretch, West Third Street, lies just outside the bright lights of central Hollywood, but feels miles away from the city. West Third eschews big brands for smaller designer boutiques, with a plentiful side of foodie favorites. In addition to being a haven for in-the-know locals, this quiet destination is also a popular escape for Hollywood stars and famous travelers alike. Diners at The Churchill (8384 W. 3rd Street) might catch a glimpse of former U.S. President Bill Clinton, who sampled the trendy eatery’s New American cuisine during a recent L.A. visit. The restaurant’s early-20th-century décor and comfortable wood and leather furnishings lend a nostalgic air, and its Churchill Burger is oft considered one of the best hamburgers in the city. Meanwhile, visitors to brunch spot Joan’s on Third (8350 W. 3rd Street) might find themselves seated next to longtime Joan’s regular Nicole Richie while dining in the quaint black and white interior or the lovely, greenery-covered outdoor patio. In addition to being a very popular restaurant, Joan’s is also a mini-marketplace that boasts top-notch artisanal cheeses, homemade ice cream, French macarons and a selection of gourmet jams, sauces and spreads that visitors can take home. While it can sometimes draw a crowd, this L.A. institution still projects a languid, relaxed feeling that will make you feel you have all the time in the world to enjoy a leisurely lunch.

(To read more or inquire about syndication, contact me)